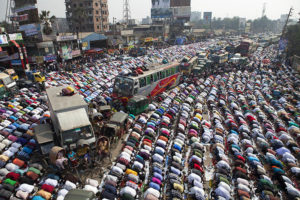 Thousands of devotees offer their Juma prayers on the road and roof of vehicles during the first day of the three-day long Muslim Congregation or the Bishwa Ijtema at Tongi, Gazipur, Bangladesh, 24 January 2014. Traffic was brought to a standstill while a number of devotees are seen offering prayers from the rooftops of vehicles and nearby buildings. The modern world meets the spiritual world in this image, which expresses the power of religion in urban areas.