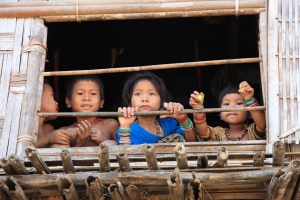 Murongs tribal children at bandarban hill tracts area of bangladesh . murongs are one of the famous tribes of aborigines of arakan and two murongskings ruled arakan in the tenth century ad . murongs live in lama , ruma , alikadam , and thanchi upzilas as near chimbuk mountain of bandarban district . muroungs population in bangladesh about 90 , 000 ( ninety thousand ) and constituted the fourth largest tribe in the chittagong hill tracts of bangladesh . murongs are patriarchal . sons inherit the property . they have different clans and many sub clans .

Saiful
Previous postAdventure In The Hills