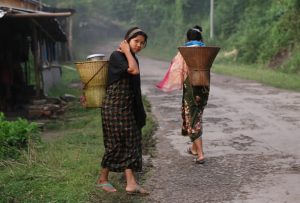 Voom Tribal girls returning to her house . Murongs are one of the famous tribes of aborigines of Arakan and two MurongsKings ruled Arakan in the tenth Century AD . Murongs live in Lama , Ruma , Alikadam , and Thanchi upzilas as near Chimbuk mountain of bandarban District . Muroungs population in Bangladesh About 90 , 000 ( ninty thousand ) and constituted the fourth largest tribe in the Chittagong hill tracts of Bangladesh . Murongs are patriarchal . Sons inherit the property . They have different clans and many sub clans .