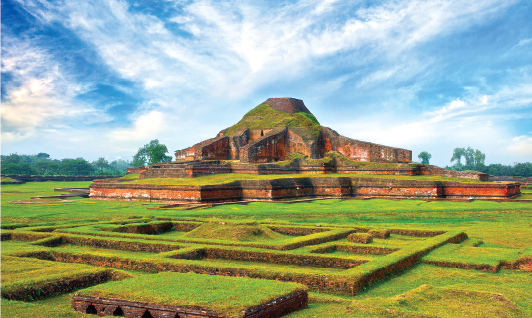 According to the Bengali Vocabulary, the name Paharpur (Pahar = hill, pur = locality) means a locality of hill. It is a village in Badalgachi Upazila of Naogaon District. The nearest railway station of Jamalganj that lies on the Khulna-Parvatipur rail tract and is connected with Paharpur by a 5km long brick metalled bye-way. Paharpur can also be reached from its nearest airport, Sayedpur, following a metalled road via Joypurhat. The village contains the ruins of a Buddhist monastery which was called Somapura Mahavihara (the great monastery situated in the locality of moon) in the ancient Buddhist World. It is now a World Cultural Heritage (BGD. 292).

It is a hilly terrain with an average height of 15m in the district of Comilla. It stands in a north-south alignment with its length extending over 17km and average breadth 2.5km. At the different points of its slope there lie a number of older structural ruins pertaining to temple, stupa and vihara. Along with these ruins some tools made of fossilized wood (could be of pre-historic origin), both Hindu and Buddhist sculptures, metallic coins, objects of daily use, terracotta plaques, carved bricks, ornaments, potteries, metallic utensils, seals and ceilings, copper plates etc. have also been salvaged. On stylistic ground they may be dated in the circa 7th-13th century AD. Scholars are of opinion that there lie the ruins of a southeastern Bengali capital, ‘Devaparvata’ by name, in a corner of the hill range. There was another capital called ‘Jaykarmantavasaka’ in an adjoining corner of the Mainamati-Lalmai Hill Range. There has an archaeological museum and a rest house in Salvana village which occupies the mid-most point of Mainamati-Lalmai Hill Range.