According to various sources, there are about 2,500 archaeological sites in Bangladesh. Historians believe that the ancient civilization of Bengal was formed on the banks of the river Ajay 1500 BC. In ancient times Bengali did not mean the whole country. Its various parts were known by multiple names. In ancient times, various districts of Bengal were divided. The people of these towns get to be known by the names of their respective towns. Many of the settlements in this region have been named as landscaping rivers. Here below some top archeological sites in Bangladesh listed from Tours and Trips Bangladesh. 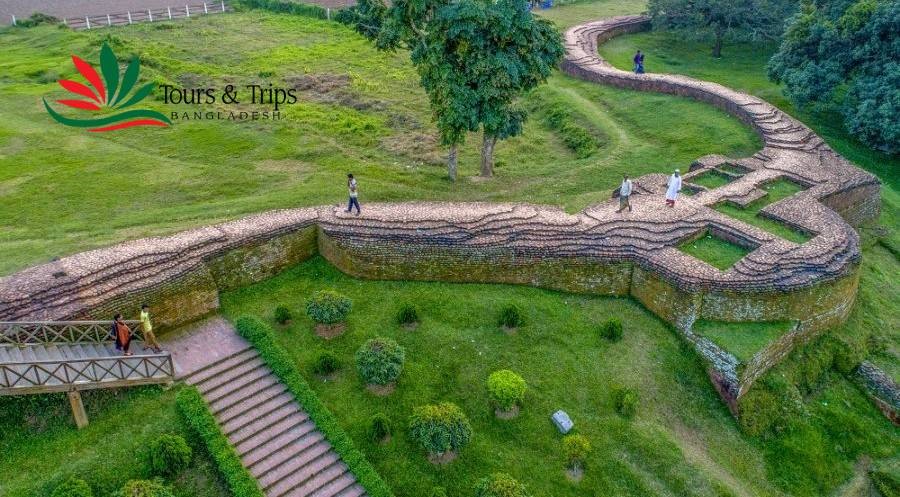 Mahasthangarh is a city in Shibganj upazila of Bogra district which is about two and a half thousand years old. The site is located on the banks of the river Karatoya, about 13 km north of Bogra city. This famous city was once known in history as Purnabardhan. Mahasthangarh was the capital of Pundra kingdom in 700 BC. This walled city has archeological monuments of different periods. For several centuries this place was the provincial capital of the mighty Maurya, Gupta, Pal, Sen rulers and later the capital of the Hindu Samanta lords. Monks from China and Tibet used to come to Mahasthangarh to study, in 1808, Francis Bukanon Hamilton marked the location of Mahasthangarh. 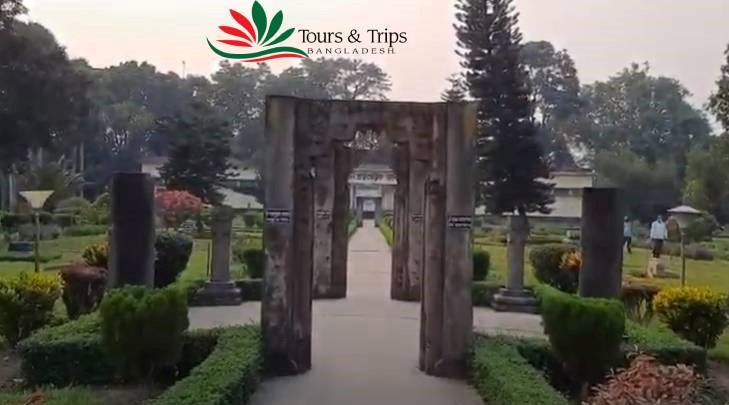 Check out our Budda’s Path tour packages to visit Mahasthangarh. 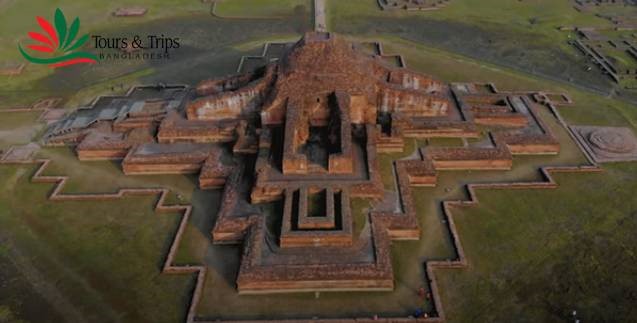 Check out our UP CLOSE tour packages to visits Paharpur. 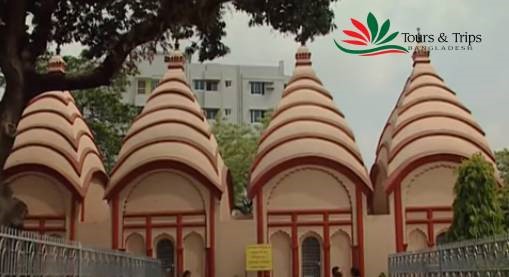 When it comes to naming Dhaka, the name that inevitably comes to mind is Dhakeswari Mandir.The oldest place of worship is the Dhaka Dhakeswari Temple. Located in Dhaka, the capital of Bangladesh, this temple has long been recognized as a national temple by the government. Different people have different views about the builder of Dhakeswari temple, some say the 12th century Sen king Ballal Sen. Someone is talking about Arakan Raj Sri Sudhan Sen’s younger brother Ballal Sen. Someone is talking about the idol of the goddess covered under the ground Many years ago some carpenters came to this area to cut wood and saw a statue that was covered with herbs; Then the huts set up the temple for the goddess Durga, there.

To visit this place checkout our Dhaka Sightseeing tour packages. 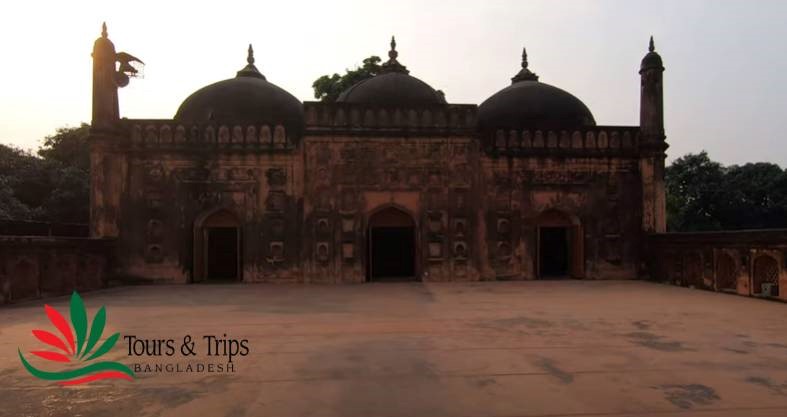 The kingdom of Gaur was the first independent kingdom established by the Bengalis in the history of Bengal, founded by King Shashanka. He ruled from 590 to 625 AD. Most of these ancient forts have fallen in the Malda district of present-day West Bengal, India, and some have fallen in the Chapainawabganj district of Bangladesh. Gaur was the capital of Bengal during the reign of the Pala dynasty during the Buddhist period in the eighth to twelfth centuries. In 1198, Muslim rulers occupied Gaur. Yet Gaur remains the capital of Bengal. In 1350 the capital was temporarily shifted to Pandua. 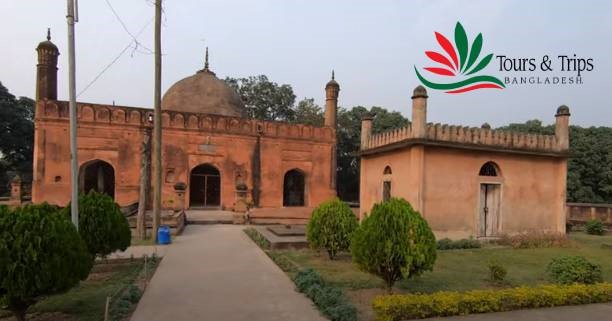 Later in 1453 Gaur was made the capital again. Then the name of Gaur was changed to Jannatabad. The Bara Sonamasjid is a notable architecture of Gaur. This place is one of the top archeological sites in Bangladesh listed from Tours and Trips Bangladesh.

To visit this place, check out our tour packages Land of Smile.

This sanctuary is situated at Kantajew, a calm confined town on the banks of the waterway Dhepa, around 12 miles north of Dinajpur city and about a mile west of the Dinajpur-Tetlia road. Maharaja Prannath of Dinajpur started the construction of the temple in 1722 and Maharaja Ramnath, the adopted son of the Maharaja, completed the construction of the temple in 1752 on the orders of his wife Rukmini. This wonderful pyramid-molded sanctuary rises three stages to the top, and at the edges of the three stages there are an aggregate of nine lavish pinnacles or diamonds that appear as though immense luxurious chariots remaining on a high establishment from the terracotta ornamentation base to the top of the temple, in every inch of the inner and outer walls, three pearls of human pearls and natural objects are wonderfully painted, following the mythology. The detailed story of Mahabharata and Ramayana have taken place here. This is one of the top archeological sites in Bangladesh

To visit this place, check out our tour packages All In One.

This place is one of the top archeological sites in Bangladesh listed from Tours and Trips Bangladesh. Sixty Domes Mosque is a world heritage site located in Bagerhat district of Khulna division of Bangladesh. As there is no inscription in the mosque, no accurate information is available about the founder and construction period of the sixty-domed mosque. But looking at the architectural style of the mosque, the archologist suspected that the mosque was built by Ulugh Khan-i-Jahan in the 15th century. 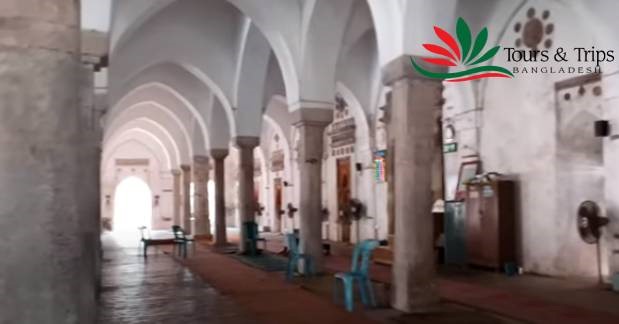 The archeological site was declared a UNESCO World Heritage Site in 1985. The sixty-domed mosque has a total of 77 domes in 11 rows. The total number of domes, including 4 domes on the minaret, is 81. In the middle row of the mihrab of the mosque, except for the 7 domes, the remaining 74 domes are semicircular. This place is one of the top archeological sites in Bangladesh.

Bagha Upazila Sadar is about 45 km east-south of Rajshahi city.The mosque was built in 1523 during the reign of Sultan Nasrat Shah of Bengal (Gaur). The mosque has 10 domes, and 6 pillars inside, the mosque has 4 arches which are inlaid with highly artwork, exquisite craftsmanship, terracotta design. The Shahi Mosque is one of the ancient architectural monuments of Bangladesh on Taka 50 notes and Taka 10 commemorative stamps. Surrounding this mosque is a huge dighi on about 256 bighas of land, the shrine of Auliya, the main Dargah Sharif and the museum.

This place is one of the top archeological sites in Bangladesh. 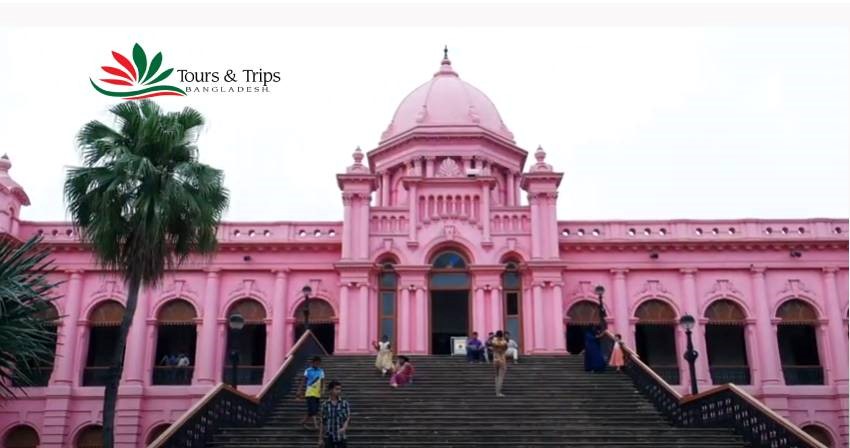 Ahsan Manzil is located on the banks of the Buriganga in Dhaka. It was the residence and headquarters of the Dhaka Nawab family with the title of British India. This Ahsan Manzil is intertwined with many national and international memories, including many historical events of Dhaka metropolitan development and political development. In 18th century Sheikh Enayetullah, the zamindar of Jamalpur Pargana, now Faridpur Barisal, built a garden house on the site of the present Ahsan Manzil. His son later sold the garden house to a French merchant. In 1830, Khwaja Alimullah purchased the palace from the French. Nawab Abdul Gani, the son of the Nawab Alimullah , renovated the building in 1869. Nawab Abdul Gani named the building Ahsan Manzil after his son Khwaja Ahsanullah. This place is one of the top archeological sites in Bangladesh.

Check out our Dhaka Sightseeing tour for a Day Long trip. 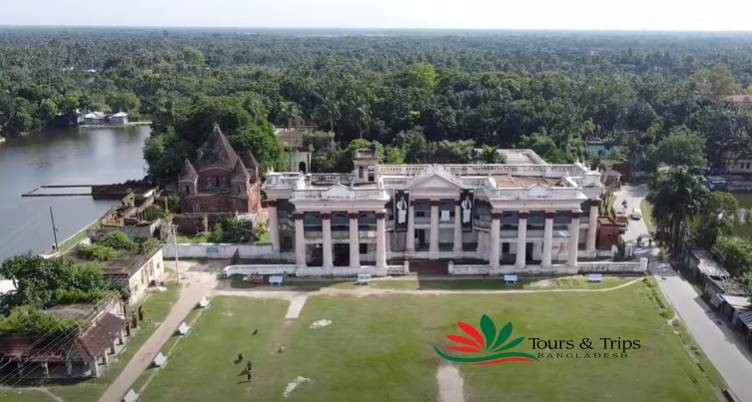 This place is one of the top archeological sites in Bangladesh listed from Tours and Trips Bangladesh. Puthia is an upazila 30 km from the Rajshahi region. Its ancient name is Laskarpur Pargana. Laskari Khan of the Pathan dynasty revolted during the reign of the Mughal emperor Akbar, General Mansingh handed over the responsibility of the entire pargana to a Hindu ruler to subdue him. In fact, Putia zamindari started from then on. Pitambar was the first man of this zamindari. Puthia Rajbari or Panch Ani Zamindar Bari is the residence of Maharani Hemantakumari Devi.The two-storied palace was built in 1895 in the Indo-European style if there was a Raj Prasad in the vicinity. 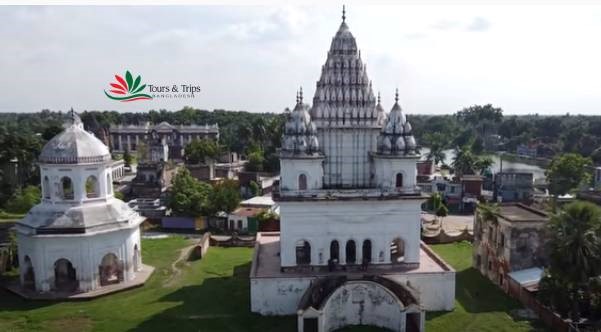 To visit this place checkout our tour packages Land Of Smile.

It is also known as the “Lost City”.Panam City is found a large portion of a kilometer away from the Folk and Handicraft Museum. The city of Panama is thought to have been established around 400 years prior. It was originally the focal point and residence of the weaving business in the Bengal region.The city of Panama is presently during the time spent being restored over a time of around 400 years, step by step converging with the Mughal structural style and the British architectural style.

Every house in this city is different in size and design. The blocks of the houses have been utilized with section ventilators and window barbecues made of cast iron.There are red, white and black mosaic crafts on the floor. Most of the houses have blue and white mosaic work on the arch, roof and in the middle. Every house has a well. Surrounding Panama and its environs was a prosperous public life from the fifteenth century until World War II. This place is one of the top archeological sites in Bangladesh listed from Tours and Trips Bangladesh.

Check out our tour packages Dhaka & Sonargaon for a Day Long tour. 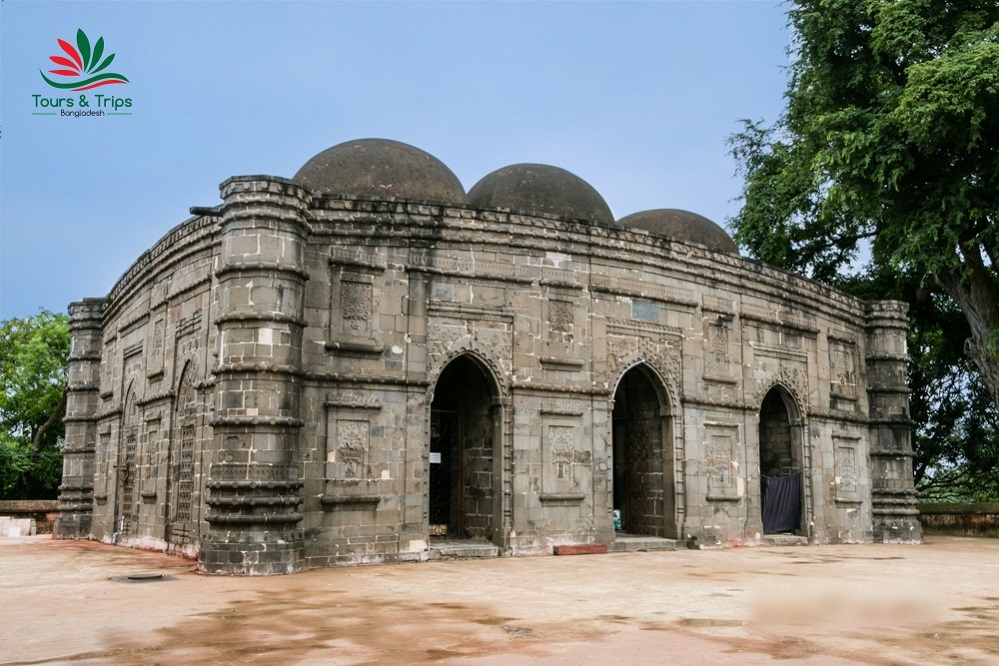 Check out our tour packages Land Of Smile. 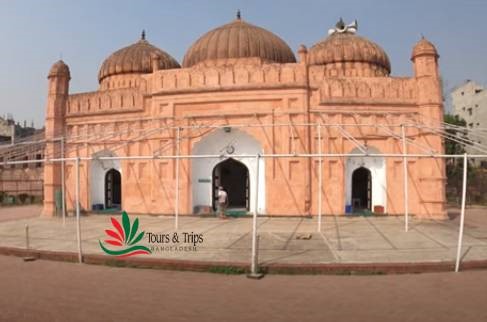 Tomb of Pari Bibi is one of the three installations of Lalbagh fort. The Arangabad area was renamed Lalbagh in 1844. This place is one of the top archeological sites in Bangladesh listed from Tours and Trips Bangladesh.

For more reading you can check to our website at Things to do in Dhaka tour.

The history of ancient Dhaka is 400 years old. There are many traditional mosques in this city. The traditional Tara Mosque is located on Abul Khairat Road in Armanitola, Dhaka. There is no dated inscription of old Tara Mosque. The original Tara Mosque was not as rich in ornaments as the present Tara Mosque. The broken and bare walls at the back bear witness to it. The mosque is also called Mirza Sahib’s Mosque as it was built by Mirza Golam Pir. Mirza Golam Pir died in 1860. In 1926, Alijan merchants spent a lot of money to add colorful glazed tiles to the mosque’s various designs and to enhance the shape of the mosque by attaching a verandah on the east side. This place is one of the top archeological sites in Bangladesh listed from Tours and Trips Bangladesh

For more reading you can check to our website at Things to do in Dhaka tour. 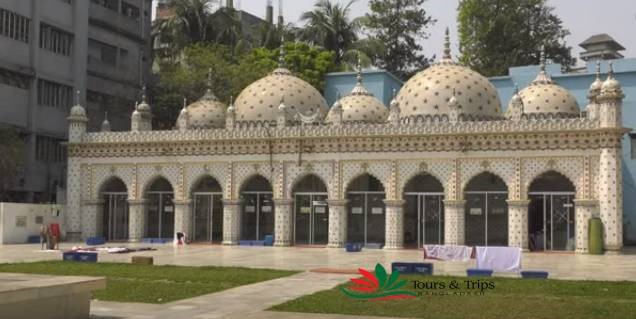 Check Out for 3 to 4 days Short & Sweet Tours, 4 to 8 days our Popular Tours and 6 to 23 days Hot Deals Tours for Bangladesh Holiday packages with Best Tour Operator in Bangladesh Tours and Trips Bangladesh.

Check out for Daylong trip our packages Dhaka sightseeing tour and Dhaka & Sonargaon.

If you feel we have not mentioned your desired top archeological sites in Bangladesh then you are most welcome to share your comments. We always care your feelings.