The People Of Bangladesh

A majority of the population of Bangladesh is Bengalis and they speak in Bangla. There are 36 different groups of tribes. Among them 83 percent are Muslim and others are Hindus, Buddhists and Christians. 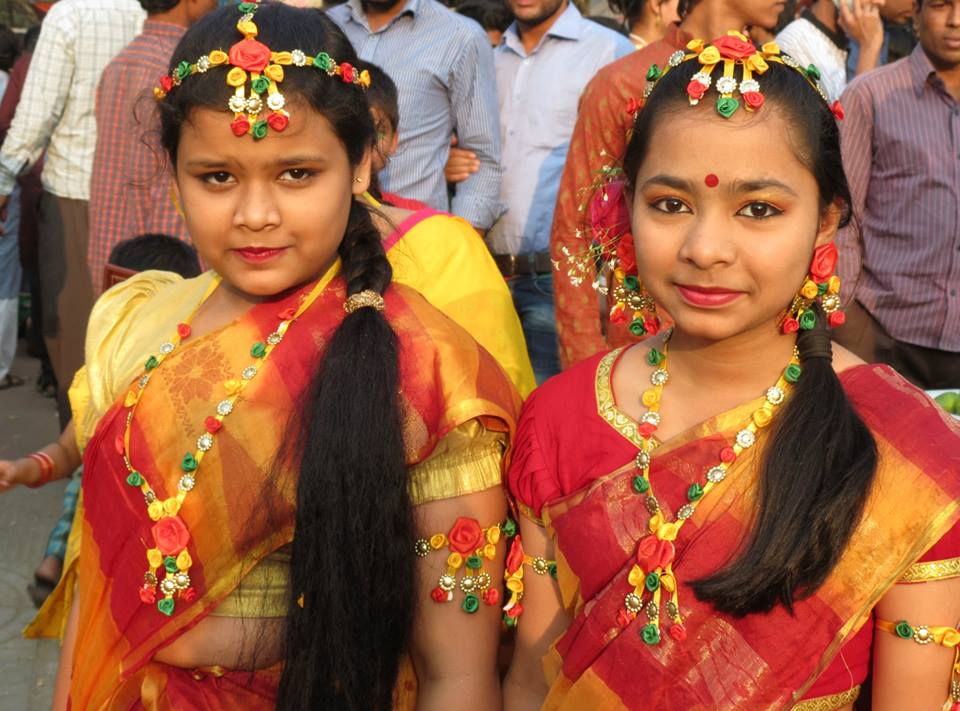 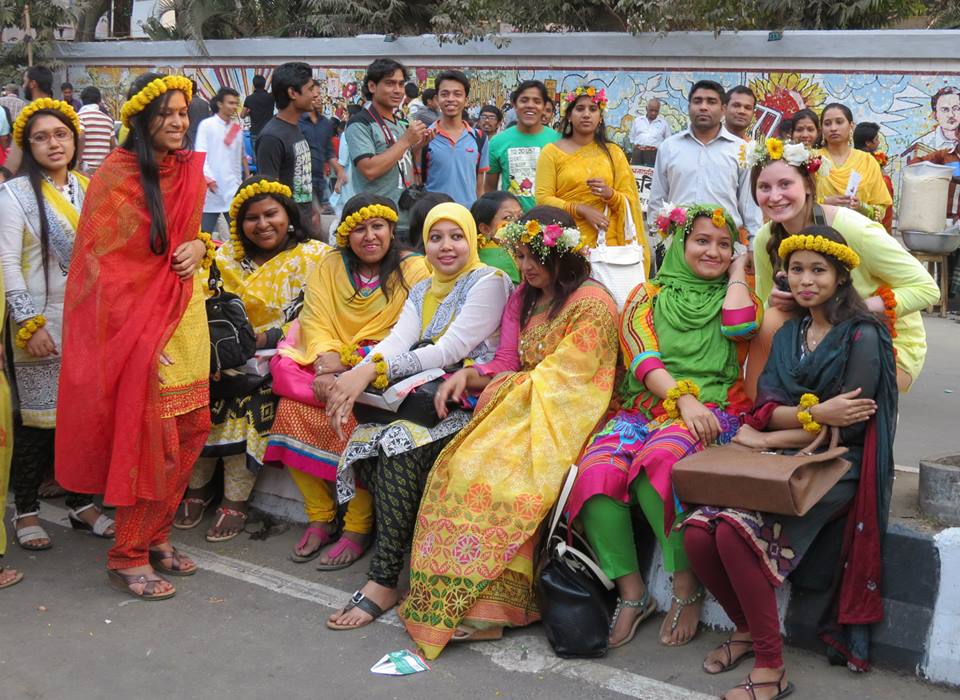 Approximately 98% of the Bangladeshi population is Bengalis. Most are native to East Bengal. The Bengali people have hybrid multi-racial origins, including Indo-Aryan, Dravidian and Tibeto-Burman, Middle Eastern and Austro-Asiatic ancestry. Today, Bengalis enjoy strong cultural homogeneity with a common standardized language and a variety of dialects. 90% of the population is Bengali Muslims (146 million). This makes Bangladesh the world’s third largest Muslim majority country after Indonesia and Pakistan. Bengali Muslims also make up the world’s second largest Muslim ethnic group after Arab Muslims. Most Bangladeshi Muslims are members of the Sunni branch of Islam. Bengali Hindus are the largest minority of Bangladesh, with a population between 10-12 million. Bangladesh has the third largest Hindu population in the world after India and Nepal. There are an estimated 500,000 Bengali Christians and 400,000 Bengali Buddhists.

The Bengali population is concentrated in Bengal delta, the coastal areas of Chittagong Division and the river valleys of Sylhet Division.

The Bengal region has been a melting pot of races throughout history, providing diverse origins for the Bengali people. Outside Bengal proper, Bengali-majority populations also reside in India’s Tripura state, the Barak Valley in Assam state and the union territory of the Andaman and Nicobar Islands. The global Bengali diaspora has well-established communities in Pakistan, the United States, the United Kingdom, Canada, the Middle East, Japan, Malaysia, Singapore and Italy. 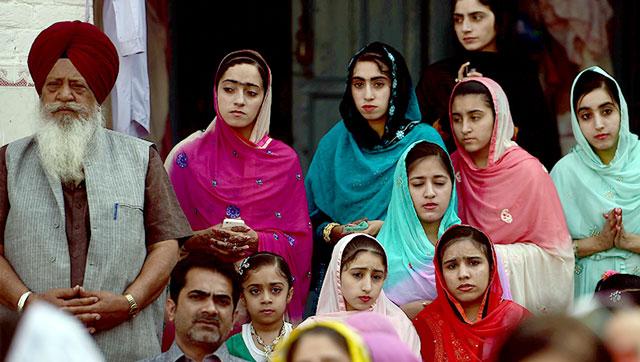 Among them Biharis are a group of people that include Urdu-speaking non-Bengali Muslim refugees from Bihar and other parts of northern India. In 1971 they numbered about a million but had decreased to around 0.6 million by the late 1980s. Once they dominated the upper levels of Bengali society. Hundreds of thousands of Biharis were repatriated to Pakistan after the Liberation war of Bangladesh in 1971.

Tribal population consists of about a million people, just one percent of the total population. There are twelve different indigenous communities living in the hill districts of Bandarban, Rangamati and Khagrachori . The major tribes are Chakmas, Marmas, Tippras Moorangs, Bawm, Muro, Lusai, and Khain; these groups all contain distinct clans. These tribal people differ in their social organization, marriage customs, birth and death rites, food and other social customs from the rest of the population and also from communities. They mainly speak Tibeto-Burman language but most of them also speak Bengali. They follow a variety of religions, influenced by the religions of the country, but some of the tribes still follow animism. 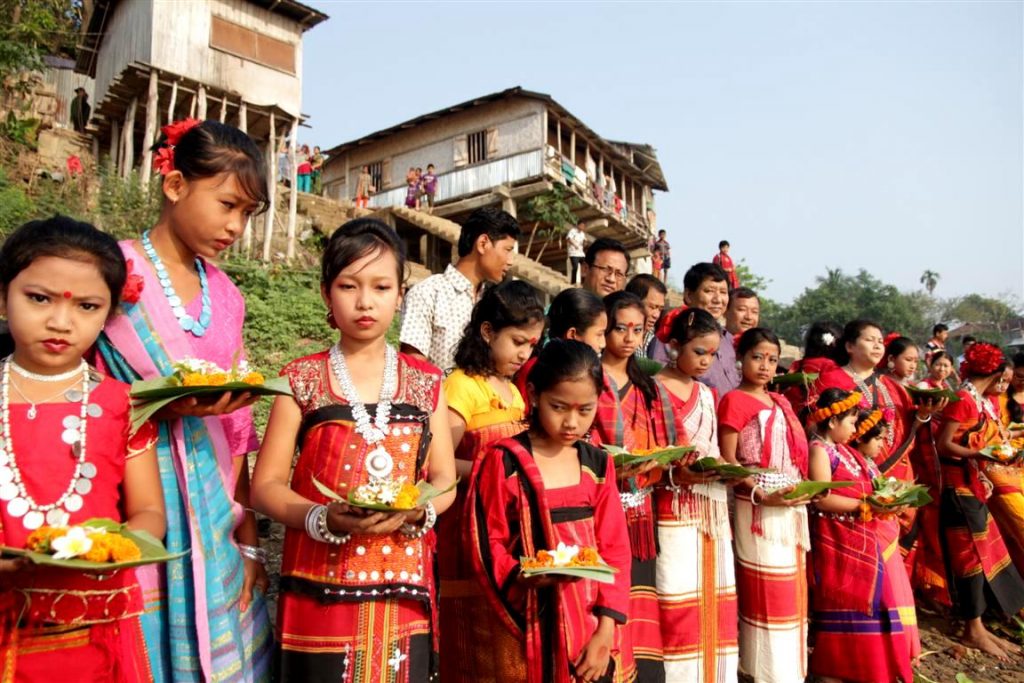 The Chakma, also known as the Daingnet people, is an ethnic group concentrated in the Chittagong Hill Tracts of Bangladesh. Chakmas are Tibeto-Burman, and are thus closely related to tribes in the foothills of the Himalayas. The Chakmas are believed to be originally from greater Arakan presently Chin state ( previously Chakma Buddhist homeland, What was occupied Zo people from Lusai Hills ) who later on immigrated to Bangladesh in around fifteenth century, settling in the Cox’s Bazar District, the Korpos Mohol area, and in the Indian states of Mizoram, Arunachal

Pradesh, Tripura.Defeated by the Arakanese, the Chakmas entered the present Chittagong Hill Tracts and made Alekyangdong, present-day Alikadam, their capital. From Alekyangdong they went north and settled in the present-day Rangunia, Raozan, and Fatikchari upazilas of Chittagong District. 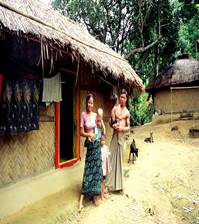 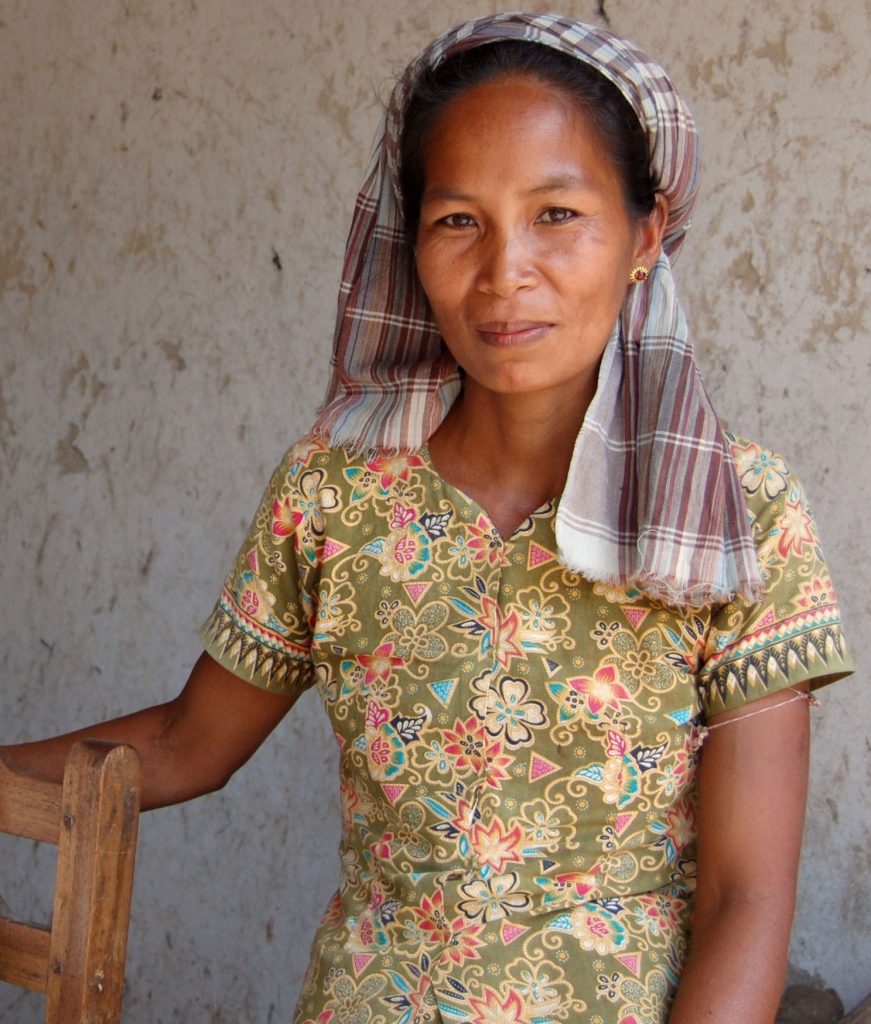 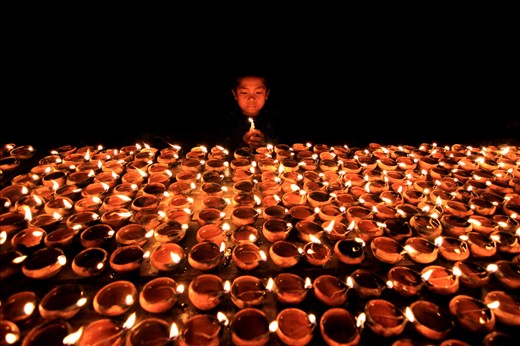 Marmas are the second largest ethnic group in Bangladesh and they are of Burmese (Myanmar) ancestry. The Marmas regarded Burma (Myanmar) as the centre of their cultural life. Their cultural traits are connected to their ancestral heritage, including dress, food, writing, traditional songs and musical instruments. They speak Marma, and the majorities are Theravada Buddhist. They have many festivals during the year, but Sangrai is regarded as the biggest celebration among them. It is a tradition to welcome the New Year according to the Buddhist lunar calendar. This festival held for three days, and the popular ritual during the second and third day of the festival is to splash water on each other. They believe that the water takes away all the sorrow and pure up our soul and body, so one must to greet others (even strangers) by splashing water on them. 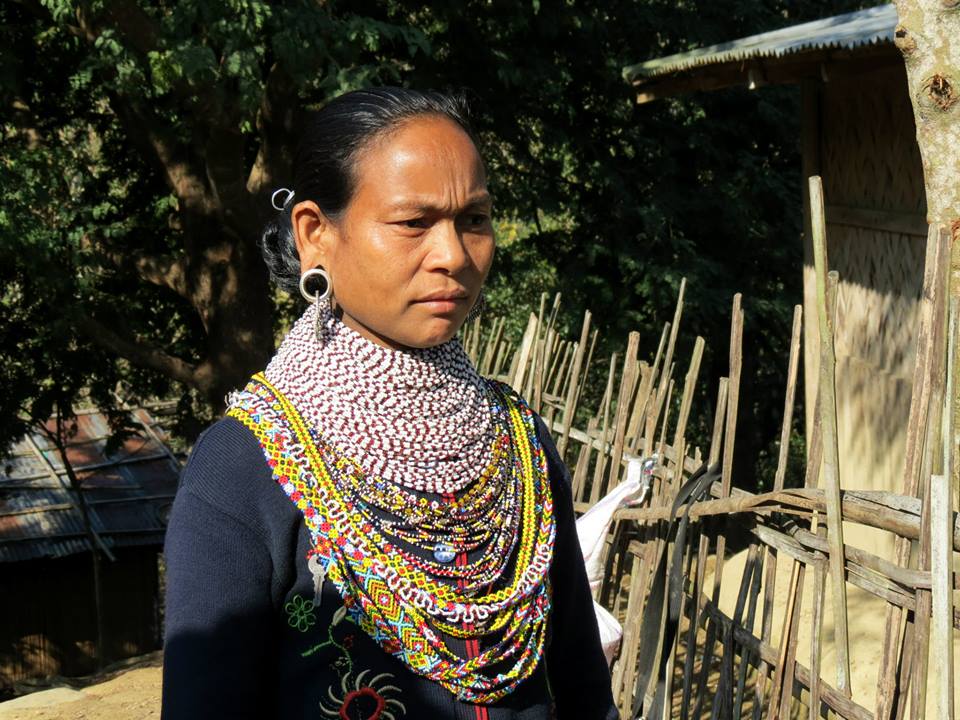 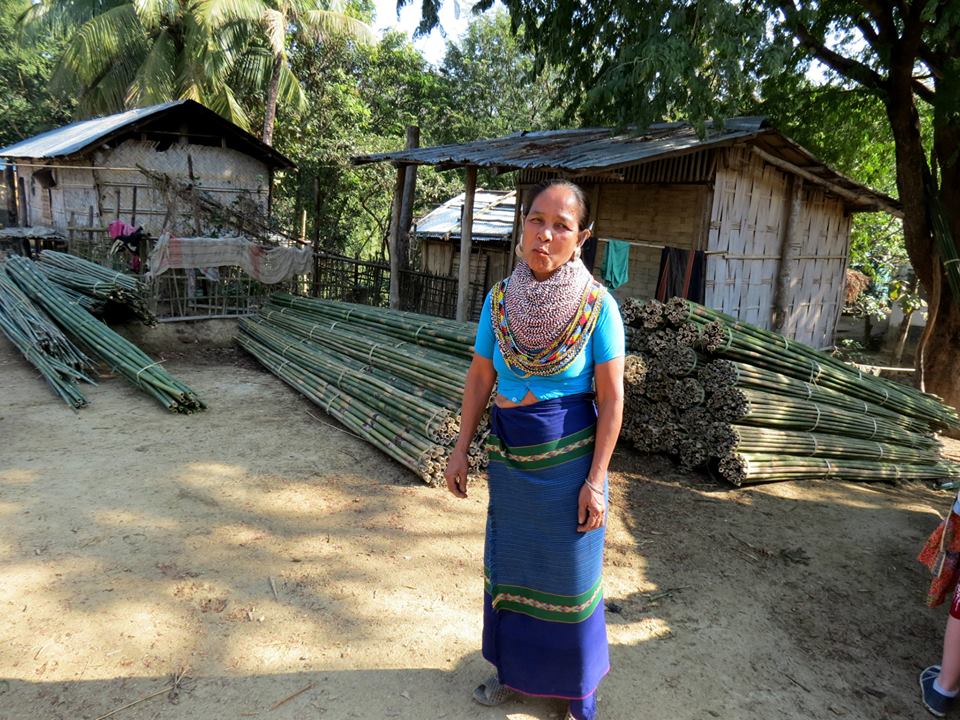 The Tripuri are one of the indigenous peoples living both in the plains and the Chittagong Hill Tracts in Bangladesh. The peoples of Tripura, both in Bangladesh and the Indian State of Tripura, now share a common culture, history, tradition, and way of life. Their languages are called Kokborok, of which there are more than a million speakers. 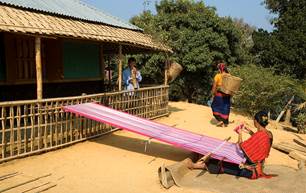 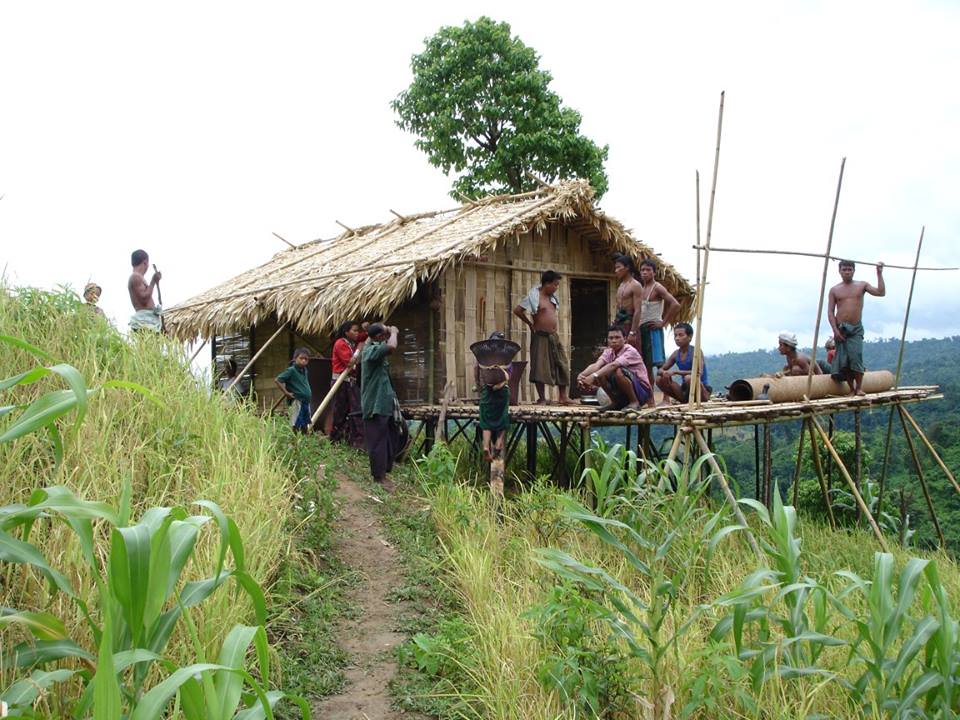 The Mros (Mrus or Moorangs) 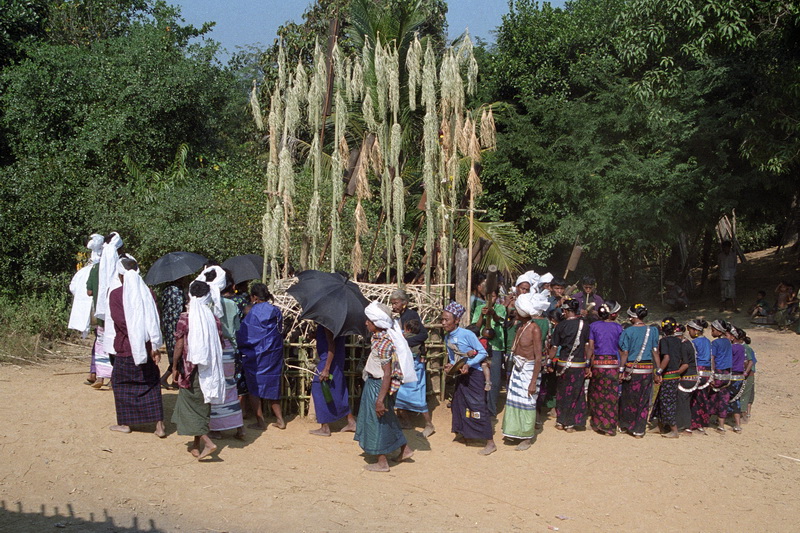 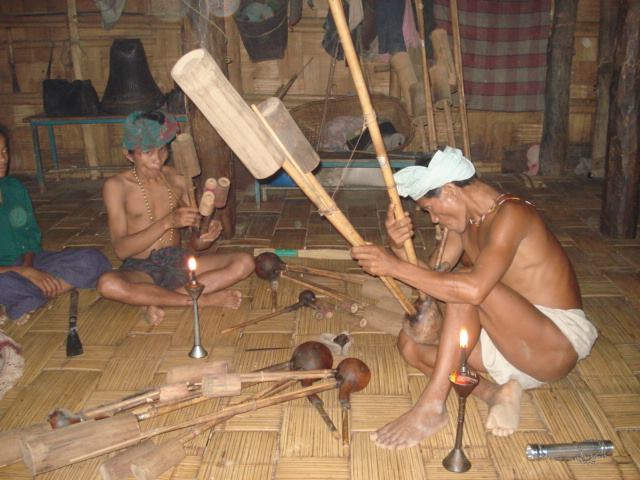 The Mros are considered to be the original inhabitants of the Chittagong Hills. They lived in the valleys and often fortified their villages. They had no written language of their own, but some could read the Burmese and Bangla scripts. Most of them claimed to be Buddhists, but their religious practices were largely animistic.

There are various tribal groups in other parts of the country. Santals are inhabitants of Rajshahi and Dinajpur. They also inhabit Khasis, Garos, and Khajons in the Mymensingh and Sylhet regions. Different tribal groups may be distinguished by their social organization, marriage customs, foods, birth and death and other social customs from the people of the rest of the country. They have somehow managed to resist centuries of colonization, and in the process have retained their own customs, traditions and life. 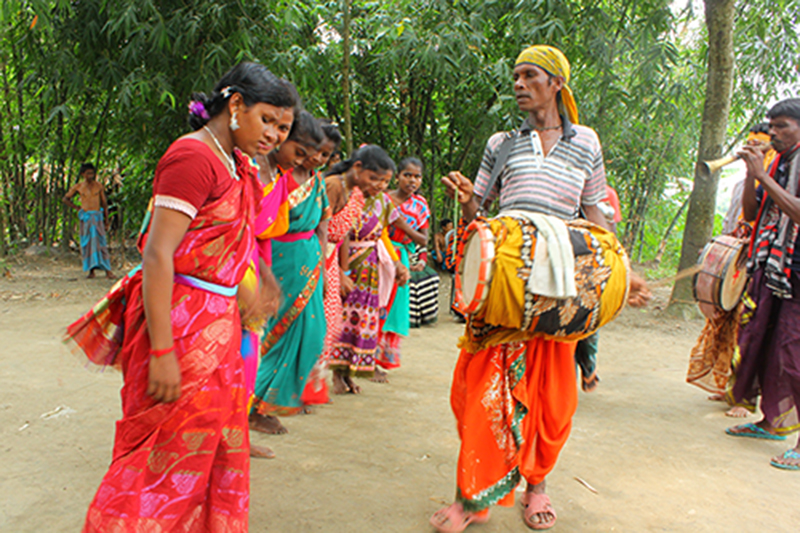 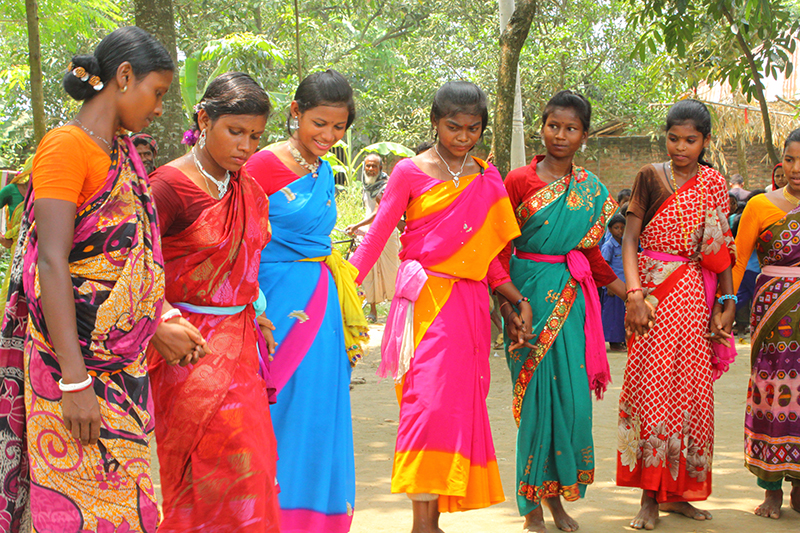 The Santals are known as one of the oldest and largest indigenous communities in the northwestern belt of Bangladesh. They are followers of Hinduism and Animism. Santals have been living in this area surrounded by nature for thousands of years and might be described as children of nature, reared by its bounty. Santal women, especially young girls, are very beauty-conscious by nature. The Santal people have their own language, culture and social patterns, which are clearly distinct from those of other tribes, and they speak Bengali fluently. They have many festive occasions around the year. Almost each month or season there’s a festival celebration with dances, songs and music.

The Garos are matrilineal ethnic community of Bangladesh, who live mainly in the valleys. Once their major activity was Joom cultivation. Now however, their livelihood no longer depends on traditional Joom cultivation; rather they have adopted modern systems of agriculture, and some of them depend on private sector employment. They used to worship supernatural powers like the sun, moon, fire etc. They now have their own culture and customs. The main festival of the Garo is called Wangkla. 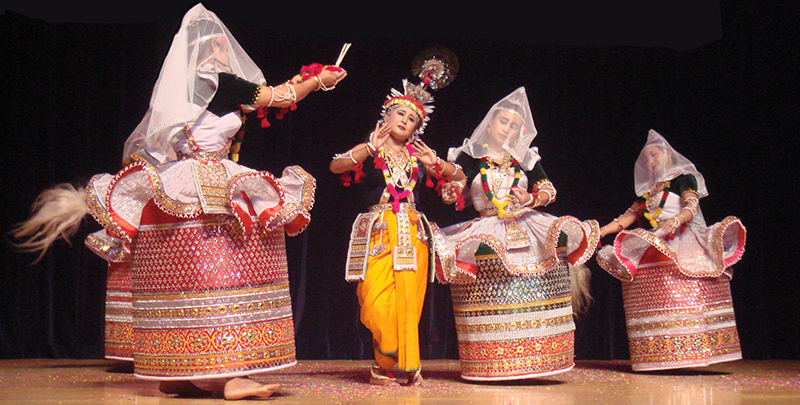 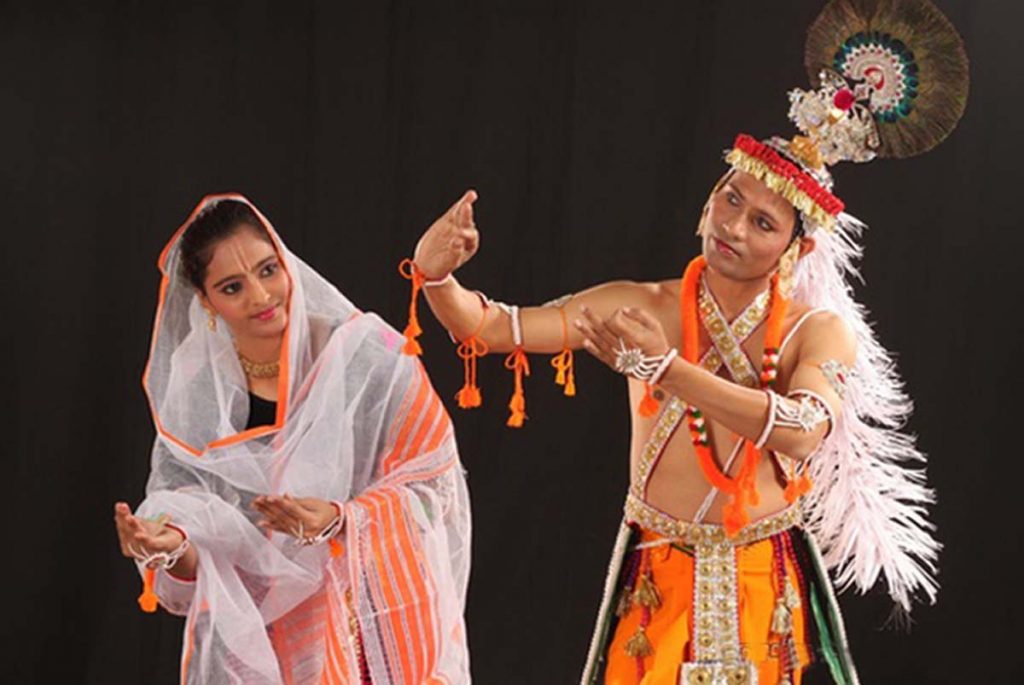 The Manipuris live in Sylhet region of Bangladsh. They are mainly Hindus. The mother tongue of the Manipuri belongs to the Kuki-chin group of the Tibeto-Burman sub-family of the Mongolian language. They have a rich and ancient culture. Manipuris are famous for their dance and dress.  The ‘Rash’ festival, with its dances, is the finest production of their culture. They are involved in farming, and lots of them are also practitioners in the jewelry business, making ornaments of gold. 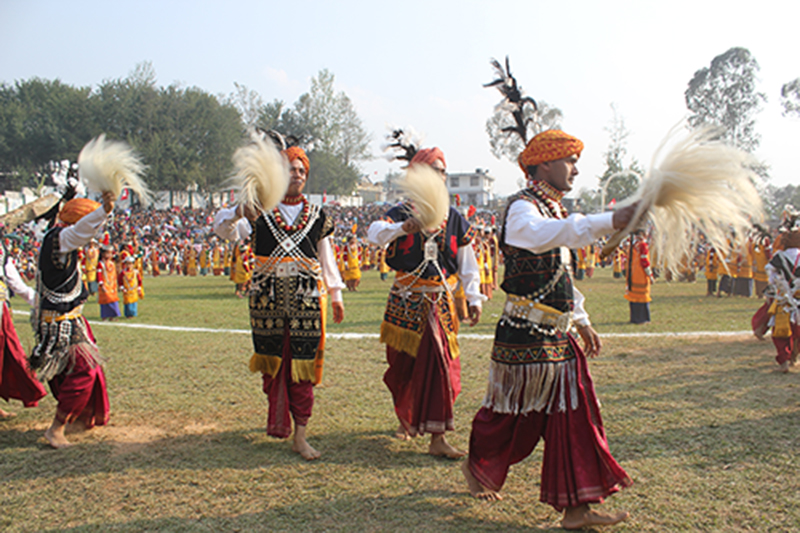 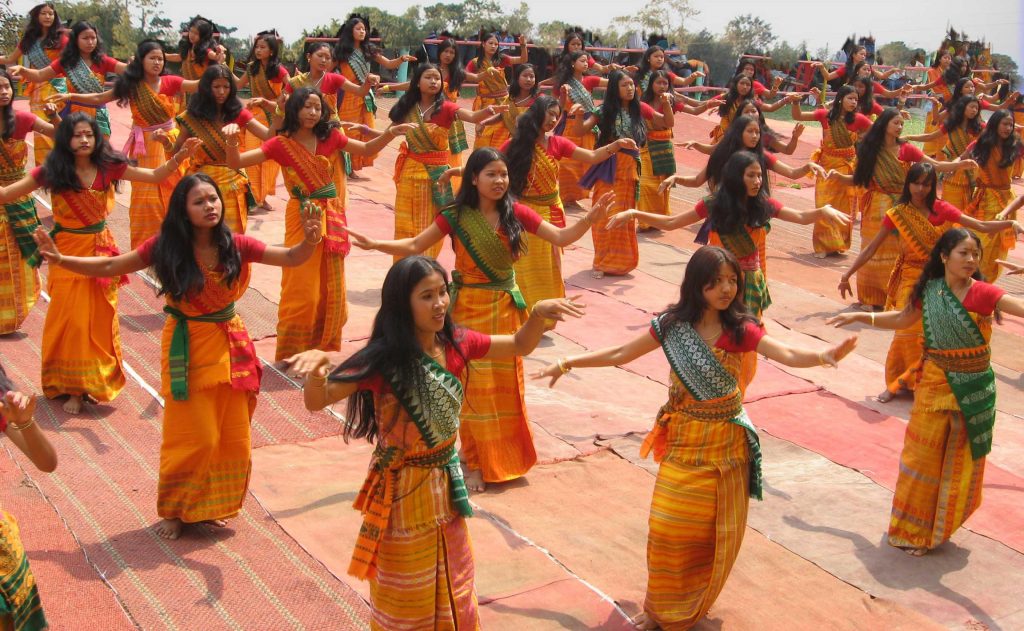 The Khasia people mainly live the Syhlet region of the North Eastern part of Bangladesh. They call themselves Ki Hynñiew trep, which in the Khasi language means ‘the seven huts’. Very few Khasi are Muslims. The Khasi people, who reside in the hill districts of Sylhet, are of the War sub-tribe. The main crops produced by the Khasi people living in the War areas are betel leaf, areca nut and oranges. It is the War-Khasi people who designed and built the living root bridges of the Cherrapunjee region. In several States of India, Khasis have been granted the status of Scheduled tribe. The Khasis are a matrilineal society. 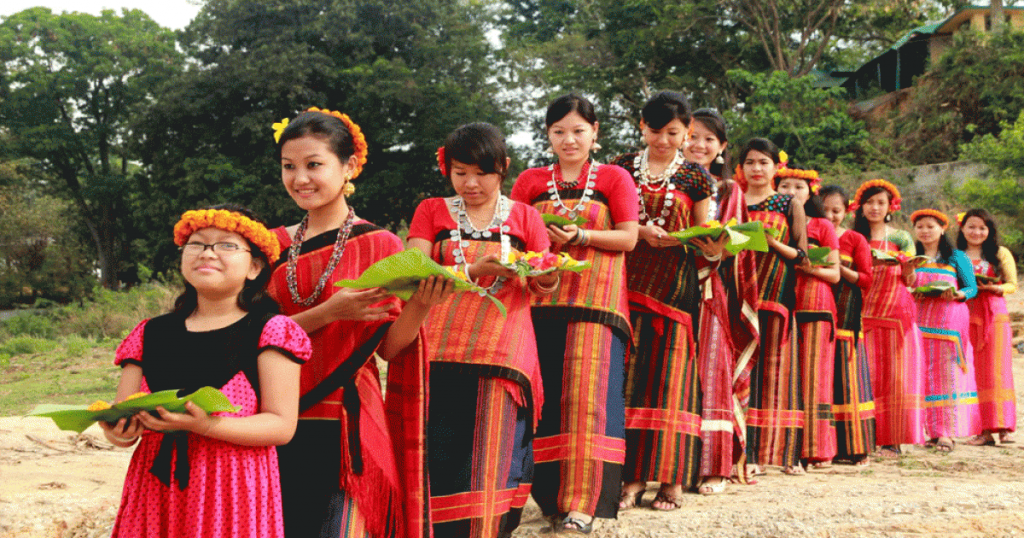 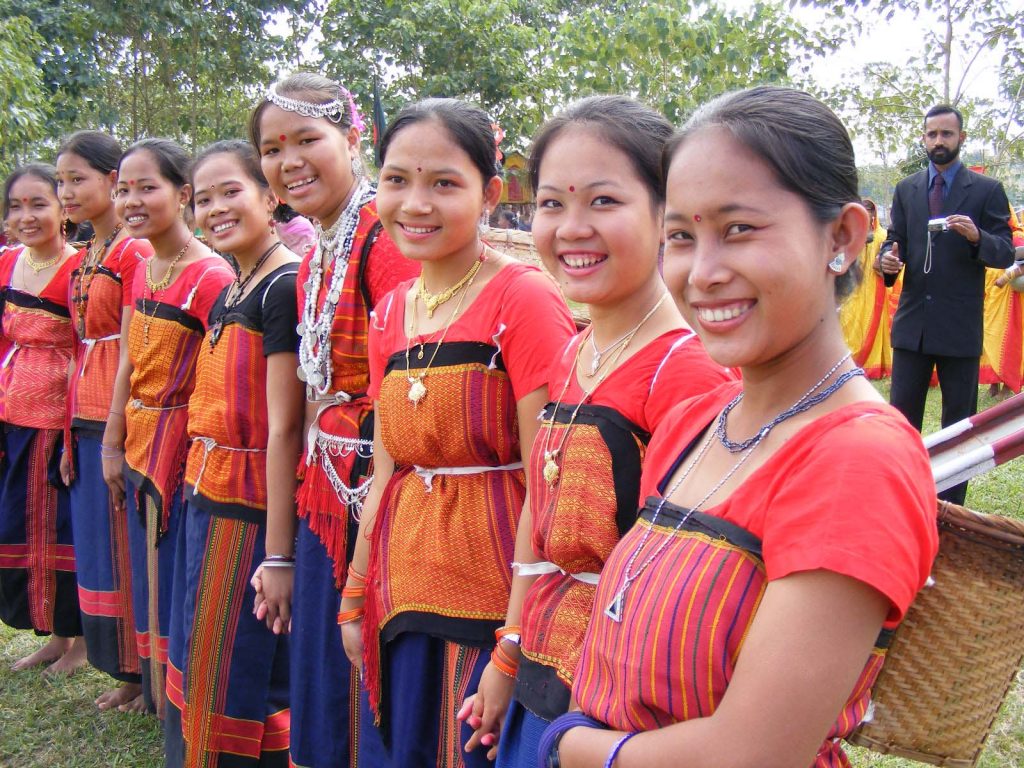 The Rakhine are an ethnic group of the Arakanese people in Myanmar (Burma) forming the majority along the coastal region of present-day Rakhine State. Possibly they constitute 5.53% or more of Myanmar’s total population, but no accurate census figures exist. Arakanese people also live in the southeastern parts of Bangladesh, especially in Chittagong and Barisal Divisions. The Arakanese are predominantly Theravada Buddhists. They claim to be one of the first groups to become followers of Gautama Buddha in Southeast Asia. The Arakanese culture is similar to the dominant Burmese culture but with more Indian influence, likely due to its geographical isolation from the Burmese mainland.